The patients with various ailments ranging from dental problems, malaria, hypertension, diabetes, typhoid and skin complications were treated by Turkish doctors under the organization ‘Time to Help’ based in the Netherlands.

Hundreds of patients in Mayuge and Tororo district received free treatment at medical camps this week, courtesy of Nile Humanitarian Agency and the Jinja based Nile International Hospital.

The patients with various ailments ranging from dental problems, malaria, hypertension, diabetes, typhoid and skin complications were treated by Turkish doctors under the organization ‘Time to Help’ based in the Netherlands.

Beneficiaries were also offered general consultation and laboratory services while at least 10 patients with cataracts and others with hernia were taken to Nile International hospital in Jinja for free surgeries.

Ugur Can Keskin, an ophthalmologist who was part of the medical team said the intervention was part of their effort towards bringing health services nearer to the local communities.

He noted that many patients especially in rural areas fail to access treatment even for minor problems, due to lack of money for treatment and sometimes the long distances involved.
Patients wait to receive treatment

“We have given them transport and we shall correct their abnormalities at no cost at Nile International hospital,” Keskin said, during the camp at Mayuge Health Centre IV.

Keskin, who said their target is to reach and correct over 10,000 people with cataracts in Africa, explained that only 30,000 patients with the condition are treated annually allover the continent.

Deborah Nabirye, a beneficiary commended the Turkish doctors for organizing the medical camp. She noted that due to the high poverty levels many people suffer and die without medical care.
Izzet Ozkan, another medical doctor and member of the group said they realized that hernia and other abdominal complications were a major problem in Uganda and would give it more attention at subsequent medical camps.

Ozkan who lives in Netherlands, said funding for the medical camp and other assistance to needy communities was made possible by donations from friends in Netherlands and Turkey. 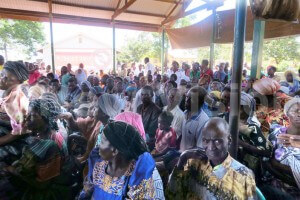